Orcas and the meaning of life 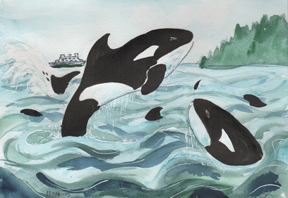 We didn't get this close, of course. Still, it was pretty wonderful watching the Orcas from the sailboat. When I told Rifaat about the Orcas, He remembered  a close up and personal experience with an Orca named Haida.

Seems Rifaat would go up to Canada about 2-3 times a year. While there, he would visit Haida at Stanley Park. There was a place were instead of double paned glass between the whales and the people, there was only a single pane. Rifaat would press his forehead against the glass and make a deep humming sound. Haida would answer instantly, and come nose to nose with Rifaat.

The last time Rifaat went to visit Haida, the old gentleman whale had died of pnuemonia.