Celebrating the Light in the Darkness

Last night, Christmas Eve, I went to bed thinking, Christmas is a lie. Jesus was not born on December 25th. Santa is a myth created for children and to enrich people who make and sell useless things.

It never bothered me before. I loved the pun: Birth of the sun/Son.It seemed totally appropriate to celebrate the birth of one who brought us Light right after the solstice, when the sun returns with her light. We need a celebration in the dark of winter, what ever the excuse. And Santa is a jolly old elf who lives in us all. 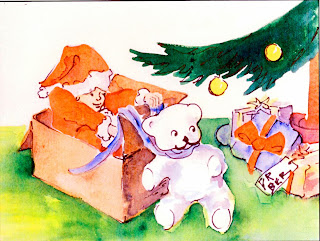 This year, the realization of wars--declared and undeclared--that my beloved country is waging with DRONES!! and the damage to civilians this brings, seemed to pull the rug out from under my joy. Plastic santas and snowmen just drove home my sense of falseness.

I did not get a Christmas tree. We just finished hanging evergreen boughs last night. My gift giving this year is uber simple; almost everyone gets a special Christmas tea blend I made up. The one expensive (for me) gift I had made special for my grand daughter was rejected. She did not like it!

Sometime in the night I woke with an awareness that all over the world people are celebrating Christmas. Wishing each other good cheer. Giving each other gifts. And I remembered that one Christmas--was it World War One or World War Two? 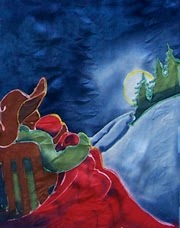 The Germans and the Allies faced each other across enemy lines, dug into trenches, guns aimed at each other. Then someone --I think it was the Germans--started singing Silent Night. The Allies joined in. All along the lines, carols were sung in German and in--English? French? Men crossed the battle lines to shake hands. A soccer game was organized. All along the front, enemies played together, sang together, celebrated together. Thousands of men had to be transferred from the front lines because they could no longer buy into the hate stories their leaders told them.

About 4 am I thought about what people were doing all around the world. Would the English have opened presents already and be eating dinner or high tea? My brother in China would be eating lunch on the 26th, I think. In New York, the children would be waking up, excited to open their presents.

May this Christmas bring you the remembrance that Love is the most powerful force in the universe and Love never dies. May this knowing bring you joy this day and all days.

Love,
suzanna
Posted by suzanna leigh at 6:25 AM No comments:

The dream of supporting myself through my art sales kind of went by the wayside. It is so much easier to dig ditches, clean houses, or teach squirming young children, than to make a living selling my art! Still, the dream won't quite die.

So, Last night I researched selling art. Two different masters at selling art, both passionate about helping artists to succeed, gave me two very different approaches to selling art, based on their different views about the purpose of art. And you know what? Both views--opposite though they are--kind of resonate with me.

Clint Watson, whose articles on selling art appear in his blog Art Marketing and Life, says the purpose of art is to amplify ideas. He advises starting and feeding conversations about art, and using your art to illustrate the conversation. Become the leader of your conversation, he advises. Build a community, a tribe, a clan of people around you who participate in the conversation. Begin with your existing fans and make them feel included in an exclusive group. Read his article, Art Marketing for Artists Who Want to Change the World,  in Fine Art News, for more on this.


Jack White writes books on selling art. I bought his book The Mystery of Making It, and began to glean some ideas from him. He says the purpose of art is decorative. If people buy your art because it goes
with their couch, don't knock it. Paint what sells. Of course, that assumes you have sold enough work to tell what people like.
Posted by suzanna leigh at 5:55 PM 1 comment: