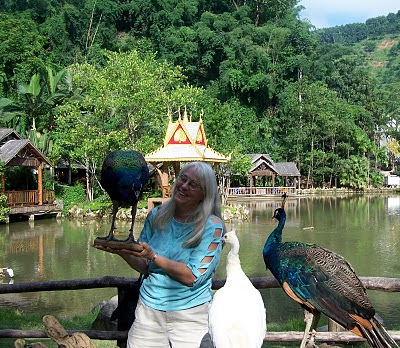 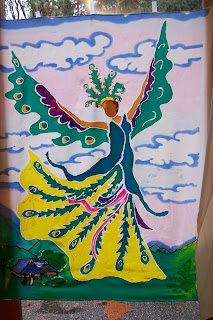 This story is from southern China, especially the Dai minority people. When China closed its doors, this story seemed unique to the Dai people and became very popular. What the Chinese did not, apparently, know was that versions of this story exist as far away as India. Xiao NIng told me this version.

The seven Peacock Princesses took off their beautiful Peacock cloaks to bath in the forest pool. They were splashing and playing and having great fun. A young Prince, hunting far from home, heard them and spied upon them. They were so beautiful! He quietly took one of the Peacock cloaks and hid it. As he moved back to his hiding place, his foot snapped a twig, and the princesses, startled, donned their cloaks and flew away—alll but the youngest. Although she looked and looked, she could not find her cloak and burst into tears.

The prince fell in love with her and was sorry he had distressed her. “I’m so sorry. I did not mean to upset you. Please, I love you. Won’t you come home with me and be my wife?” Well, the prince was good looking, and the young princess agreed. In fact she fell in love with him as she rode back behind him on his horse.

They were very much in love, this young couple, and lived happily in his father’s palace for a time. Time came, though, when the prince had to ride away, leading the army to defend the kingdome from the neighboring kingdom. Before long, word came that the prince had been killed in battle. The court wizard persuaded the grief stricken king that it was the fault of the Peacock Princess. “She is a witch!” he said, “and she must die!!” The king belived the wizard.

“If my prince is dead, I have no wish to live” the princess cried. “Just let me dance one more time for you in my peacock cloak.

The king agreed. The princess donned her cloak and danced. As she danced, the cloak turned into wings, and she flew away to her father the sun.

A few days later, the prince returned. The rumor of his death had been false. He set off to find his bride. After many many adventures, he came to the palace of the Sun. The Sun, however, would not let him see the princess or even to send word to her that he was there. Forlorn, he hung around outside the palace in the garden. One day, the Princess’s maid came into the garden. The prince gave the maid a bracelet the princess had given him, and bade her tell the princess he was there. The princess recognized the bracelet immediately, and so the lovers were united.

In the forest of Xishuanbana, there is a frescoe of this story, and the Dai people who manage the forest and who provide dances for the tourists, dance the Peacock dance. There are flocks of Peacocks in the forest who fly down from the trees in the morning to eat food scattered in the grass. I got my picture taken with one. In nearby Jinghong, peacocks adorn some of the brightly painted buildings.
Posted by suzanna leigh at 4:15 PM