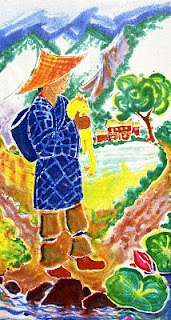 Boachu and Golden Phoenix
Rescue the Sun—A Solstice Story
This image is from a Chinese story of how the sun was rescued. It seems that the sun went missing, and it was always dark. One man set out to find the sun, accompanied by a golden phoenix. His wife waited for him on top of a hill. When the phoenix returned without her husband, she knew he had perished. Not long afterward, the wife was delivered of a son. She named him Boachu. This son grew quickly and was soon a young man. One day Boachu asked his mother why she was so sad. She told him about his father, who had perished trying to rescue the son. Boachu, then went, accompanied by the golden phoenix.
They had many adventures on the way. In one village, the people wanted to help Boachu, but they were very poor. Each household donated a small piece of their own clothing, which they made into a coat, the Hundred Family Coat. Another village had only dirt to give Boachu, so he filled his pockets with dirt.
Boachu and the phoenix climbed many mountains, forded many rivers. Demons froze over one river, but the hundred family coat kept them warm. At one point, they came to a fork in the path. An old woman told them they should take the path to the right, and they would find a warm welcome, food and shelter.
Boachu started to follow the old woman, but the phoenix hit him with her wing to let him know that was the wrong way. Boachu ignored her, and followed the path to the village, where he did indeed find a warm welcome and lots of good food. But as he was about to take a bite, the phoenix dropped a shoe in his soup. Boachu saw that it was his father’s shoe, and he realized that these were demons and that they had killed his father.
Boachu and the phoenix escaped and continued on. At last they came to the sea. Then Boachu threw the dirt from his pocket into the water, and the dirt became islands so that they could cross the sea to where a Sea demon King had imprisoned the sun.
Boachu fought the Sea demon King until he defeated him, then began pushing the sun up to the surface. But Boachu had no more energy and died. The Phoenix finished pushing up the sun, until at last the sun was free and could shine on everyone again.

I learned this story in Hangzhou, where there is a tower built to honor Boachu. I especially love the concept of the Hundred Family Coat, and the Phoenix, which to me represents our inner voice, our spirit, which never dies. In China, the phoenix has a deep and complex meaning, which includes loyalty, integrity, and virtue. While the emperor is represented by a dragon, the Empress is represented by the phoenix.
Posted by suzanna leigh at 3:45 PM