Walking with camera in hand 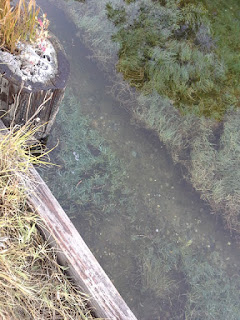 What is it about this photo that makes me want to translate it into silk?

This was taken in winter; see the frost on the piling? It was high tide at KVI beach--one of my favorite walks. I used to walk here as I recovered from surgery, with camera in hand and eyes open to the designs in nature. When I struggled with depression during the "change of life", walking with camera in hand lightened my mood. When I ran the school in my home, I made it a point to walk here once a week, to calm and nourish my soul so that I had more to give the children.

I am very fond of diagonals lately.
I love the strong design element in this photo, and the colors.  It has been on my mind for almost two years, to create a piece on silk with this inspiration. I am planning to include the finished piece in a body of work I am calling Where Land Meets Sea. It will show in May and June at Puget Sound Cooperative Credit Union.
Posted by suzanna leigh at 4:20 PM No comments:

After the Feast: Silk Art in Progress

The Native Americans gather from all over the North West U.S. and Canada, by canoe, to potlatch,
renew relationship ties, practice native languages, and honor traditions. Sometimes we have accompanied one of them as a support boat. If a paddler needs a break from the canoe for any reason, we are there with blankets, hot drinks, and a working toilet.

One year we met them at  Port Gamble, a former lumber town on Keystone Peninsula, for a clam and crab bake. From there, we accompanied the Blue Heron canoe to Port Townsend. Mike Evens was the skipper of the canoe, which represented the Duwamish people. His paddlers were all ages, including teens and sometimes a really young passenger. Many a lost young person has found themselves and turned their lives around with the support of the Canoe Journey.

The year we met the Blue Heron canoe at Nisqually, a young woman--I think she was 14 years old--came aboard for some quiet time. She showed me a scar on her ankle where she had carved her boyfriend's initials. She spent some time in introspection on the bunk under our NW carving of Raven, which happened to be her totem.

A few years later I met her again, doing a presentation about the Canoe Journey with Mike Evens. What a strong competent young woman she had become! So proud to have been a small part of that transformation!

The photo I took at the clam/crab bake reminds me of her. I love the colors and I love being reminded of the community and camaraderie of that time. I think of these as I work on "After the Feast" in silk.

Posted by suzanna leigh at 12:15 PM No comments: