Stories on Silk is being well received!

This is so exciting! The first printing of my book, Stories on Silk; A Peek into China, has sold out! The next batch arrived just two days ago and is already in three new local markets and selling!

Here is a piece of one of the stories and an illustration from that story:


“Love Birds” is the story of Shi Wa and Hua Mei. It reminds
me of Steve Watkins and Xiao Ning, especially Xiao Ning, because
the lovers were not young when they married; they were
hard workers and very talented. Hu Mei embroidered beautifully
and Shi Wa sculpted in stone.


Long ago, in a village called Zhuji, in Zhejiang Province, lived a
strong young man called Shi Wa and a beautiful young girl named
Hua Mei. Shi Wa was a farmer and a stone carver with a reputation
wisdom as well as strength. Hua Mei’s skill with embroidery was
known through out the area, and her singing could make the flowers
bloom and the hills dance.
When Shi Wa had finished work in the fields for the day, he and
other young people climbed the hills and dug into the stony hillsides
to plant flowers and trees. The young men carved images of Buddha
into the stones.
Shi Wa and Hua Mei naturally fell in love, but they refused to marry
until all the stones had been carved and all the flowers embroidered.
When at last the work was done and the last flower embroidered, the
wedding day was set. It was to be at the Moon Festival, the fifteenth
day of the eighth lunar month. As a wedding gift, the villagers built
a house for them, on a hill.
That night, they strolled in the moonlight by a nearby brook. The
stars shined brightly and even the celestial fairies shared their happiness!
The villagers celebrated until nearly dawn, congratulating
them. Everyone was happy.
That is, everyone except the Thunder God. HE thought such a beautiful
woman should belong to HIM!

The story "Love Birds" is one of seven Chinese Folk Tales in Stories on Silk; A Peek into China.
Steve Watkins and Xiao Ning are also introduced in the book. The book is now available here (scroll down on the home page to find the book).

Posted by suzanna leigh at 9:20 PM No comments: 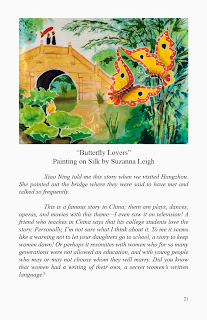 My book is out and selling! The Vashon Artists Spring Studio Tour is over. And I am exhausted!

Here is a sample page from the book.

I'm offering the book Stories on Silk; A Peek into China at an introductory price of $7 plus $3.50 shipping, through me at studioatsuzannaleighdotnet. This offer is good through midnight PDT Friday May 15th.

Posted by suzanna leigh at 9:39 PM No comments:

In February, brother Steve was home for a visit from China. We--four generations of family--gathered to celebrate his birthday! Here is the first page of a story I am working on based on fond memories of that day.

Posted by suzanna leigh at 1:30 AM No comments: