The impossible garden: Chickens in Thomas the Train 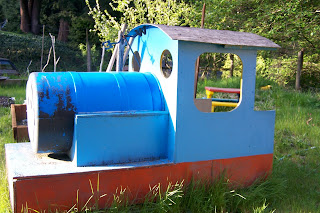 Will Thomas the Train make a good chicken coop?

Thomas is left over from when Suzanna's School and Studio (my official business name) was mostly school and where I now want the garden was the playground. We had mostly girls in the school the year Thomas was created. Bob asked if we would like for him to build us a playhouse, but the girls opted for a train.

Thomas took us all over the world, including to the north pole. Sometimes we climbed up on his roof, and a few brave 5 year olds jumped off with wonderful flying leaps. Sometimes we pretended he was a dragon we were riding up over the trees and into the sky. 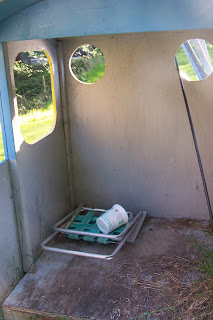 Thomas has been sitting empty now for about 3 years, except for the friendly wasps who built a nest inside last year,

This year, some neighbors and I decided to have chickens together. Not "raise" chickens, exactly. None of us wants baby chicks in the bathroom, or to wake in the wee hours to rooster crowing, but we do want eggs. With three of us to care for the chickens, we figured we would all still have the freedom to travel at times, and none of the chores would be too onerous. Also the expenses could be shared.

We spent days researching possible chicken houses that we could build for next to  nothing and looking at different places we might put the chickens. We only want 4 hens to start with. 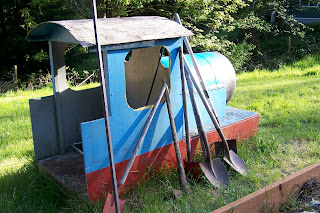 Eureka! What about Thomas the train? Several days more of researching what exactly chickens need, and measuring, and I think it just might work, with a little bit of modification. We can build windows with plexiglas--Lynn and I both have some.  We need to make a door in back and put in some  2 x 4 's or branches for the hens to roost on. The space inside is 3' x 2'--just room enough for two roosts 2' long and 1' from the walls. We can pull Thomas's front out and put nesting boxes there. Feed will have to be somewhere else, safe at night from raccoons.
Posted by suzanna leigh at 7:42 PM