Journey to the Sacred Moment (Seminar on Marketing) 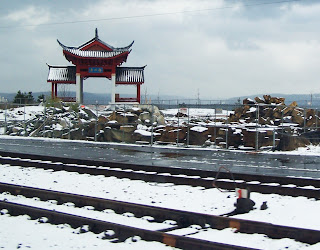 The train doesn't mind icy roads and snow.  I parked the car in Tacoma and boarded the southbound Amtrak to Portland, Or, for Mark Silver's seminar on marketing with Heart, The Sacred Moment.

It was a life changing event.

Mark turned on its head the marketing jargon that so jars my soul, and gave me a whole new way to look at some of the aspects of building a creative business that have troubled me most.

Pricing for example. How do you price art? Time and materials is not a good guide; the best, most inspired art can take but a moment, while work that I struggle with forever can turn to mud. Sometimes a piece marinates in my subconscious for years before it finally finds expression. The market isn't much of a guide either; so many people under price their work, or sometimes I can't for the life of me figure out why a painting that I can't stand sold for so much!

Mark taught us that the Heart knows the right price. The Heart puts all the information together and weighs it for us.  Through the practice of Rememberance, of connecting with the Divine, one can find a price that one knows in one's soul is right.

Mark ended the seminar with a plea to us to help to change the status quo business practices that are devastating our planet. To build businesses based not on greed and empire building, but on Compassion and Respect for others and for our beautiful planet.

Count me in on this one!
Posted by suzanna leigh at 3:02 PM 4 comments:

Painting on Silk with Elders 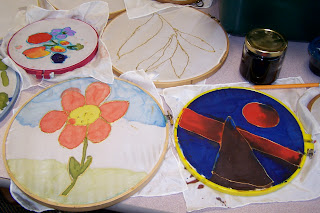 Working with elders is a little like working with children. They have a clear vision of what they want to create, but their fine motor skills don't don't quite match their vision. Their fingers don't quite go where they want them to.

Even so, look at the beauty they created on silk today! And they did have fun!


I'm off to Portland, Oregon, to learn how to market my work in a new way. ... to learn a new way of thinking about marketing. I may or may not be able to post something on Friday.
Posted by suzanna leigh at 6:00 PM No comments: 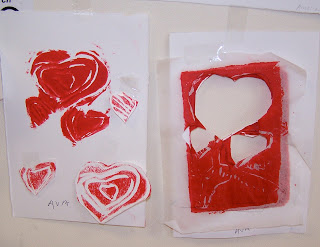 Such fun! Print making has some tricky parts to it: the way the image reverses when you print it, learning how to register two different colors, learning to block out part of the image where you want the paper to show through.

Ethan was reluctant to try two color printing at first, but he worked at it, trying it several times, until he got the effect he wanted.

You can see his first attempt, the one at the bottom, did not register well. 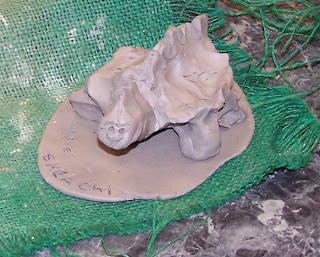 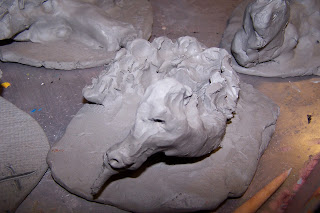 Isn't he a cutie! This little guy was made by one of the first graders I'm working with. 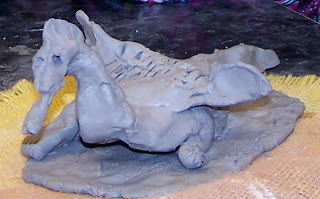 And this Sea Serpent!
And this one with 4 wings!
Posted by suzanna leigh at 10:57 PM 3 comments:

A valentine for you 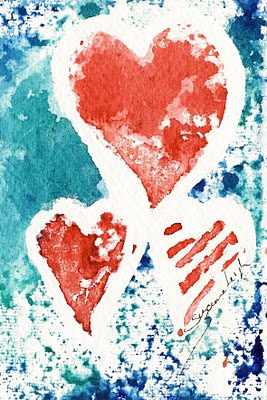 Saturday I made valentines in honor of St Valentine, who spent his time in prison writing letters to people to tell them how much he loved them. Today I am giving them away to friends and family.  I will mail some;  I will carry some to give to people I meet as I move through my day.  This one is for you. Just click on the image, then print it on photo quality paper for a really nice effect. Mine printed out about 7" x 9". I like the matte paper rather than the glossy. 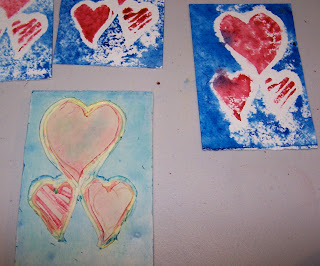 I made about twenty valentines using a block print carved in safety cut.  It is available at Dan Smith Art Supplies. I used water color paints rather than printing ink, and soaked the paper for a bit. Sometimes I let the paint dry before printing, but often I was too impatient.
Posted by suzanna leigh at 2:39 PM 1 comment:

Tea With My Friend, a silk painting

This silk painting, Tea with my Friend,  is about those intimate conversations with a close friend over a cup of tea. It is hanging in the Tea Shop with several of my newest paintings.

I'm planning to get a gallery on line of the Tea Shop paintings and other painting that go with the theme Stories of Loving.

We made some fantastic Dragons today!

I was surprised how much first graders know about dragons--and what they didn't know. Very few had heard about St George and the dragon, or were familiar with dragons as maiden eating pests, but many knew about wise Chinese dragons, as well as many modern dragon stories that I don't know.

Children could describe many kinds of dragons; dragons that live in water, those that have wings, the many that are serpent like. They knew that not all dragons have legs, not all spit fire (some spit ice!), many spit poison.

I gave the children plastic modeling clay and three ways to make the dragon body: starting with a ball, a cylnder (snake), or a pancake shape. I showed them ways to individualize their dragons by pulling out long necks or legs, making fins for the water dragons, adding horns, drawing on scales, etc. We found the pancake shape was best for making sea dragons with fins.

Here are some of the results:

Posted by suzanna leigh at 6:00 PM No comments:

I'm teaching Dragon Lore to first graders; we will make clay dragons and dioramas for them to live in. Which of the hundreds of Dragons shall I tell them about?

I promised their teacher three types of Dragon body types for them to create. The most common body type in stories seems to be serpentine.

The Lambton Wyrm
The Lambton Wyrm, caught by young lord Lambton when he played hooky from church one Easter Sunday in 1420, unnerved him so, he changed his ways and became one of the faithful. He threw the Wyrm--about 3' or 4' long--into a nearby well and went on a pilgrimage. When he got back, he found that the Wyrm had grown so long it circled the hill nine times, and was eating sheep, cattle, and even occasional people.  On the advice of the local witch, he had special armor made, all covered with spikes, and lured the Wyrm into the fast flowing river. Here he chopped it up into tiny bits, which the river carried away before they could reunite and make that dragon whole again.

Jason and the Golden Fleece
You've heard how Jason and the Argonauts captured the golden fleece from the serpentine dragon guarding it? You may not have heard that Medea, a woman he picked up in his travels, sang to the Dragon and splashed juniper and other herbs into his eyes until he fell asleep. When Jason grabbed the fleece and fled to the ship, Medea stayed behind long enough to rub a healing salve in the dragon's eyes. Later, when she needed to flee her enemies, the dragon carried her away on his back. Medea was the first Dragon Rider I know of.

Naga
When I traveled to Thailand and Laos, I learned of the Naga. These great serpents live in sumptuous palaces in lakes and rivers. They are guardians of Knowledge, and they guard the stairs to the Heavenly Palace. They frequently give gifts to humans. When the Buddha was meditating under a tree and about to be drenched by a heavy rainstorm, a seven headed Naga spread his seven hooded heads over the Buddha to protect him.

As I learned more about the Naga, I realized that they were not just snakes; they are considered the same or relatives to Dragons.

After the show--Walking the Golden Path

My show opening on Friday was a success, if you count the number of people who came out despite the weather, and the many who shared their stories of Loving, posting them on the wall between the paintings. Some of the stories are very touching.

Even so, I woke the next morning in the pit, flooded with anxiety about my next project. I've been so focused on getting this show together and making sure it makes an impact, that now there is a hole where that intense intention was, and panic rushed in.

I lay in bed an extra hour, letting the panic play itself out, to wash over me like a wave, then recede, leaving a call for action in it's wake.

I made clay dragons with my potter friend Joy, in preparation for teaching Dragon Lore to first graders, and talked with my friend Morgan the street musician about how he feels drowned out by amplified sound masquerading as music.

Then I was bone tired, so I napped and read the rest of the day.

Does any one else experience these pits after completing a project, hanging a show, or doing a performance?
Posted by suzanna leigh at 1:50 PM 2 comments:

Walking the Golden Pathway: Stories of Love and Loving

Hanging the show tomorrow and still need to photograph and frame several pieces! Bless the sun, but it does cast shadows and make it difficult to get good photos!

The theme of my show is Walking the Golden Pathway; Stories of Love and Loving. I will invite people to share their stories of Loving, perhaps inspired by my work. 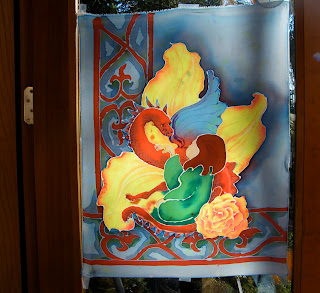 This is "Love in Utero". Sometimes it takes courage to have a baby. This woman is pregnant, and the dragon is her friend. The dragon is both her own creative power, and the danger a pregnancy can involve, especially if the woman has a chronic disease. In some countries many woman and babies still die in childbirth. Even in the U.S., there is always an element of the unknown. Will the baby be OK? Will the birth be natural, or will it involve a C section or induced labor?

This image was inspired by a fellow dragon lover, who has Multiple Sclerosis, and has decided to risk a pregnancy at age 35. She is doing well so far!

My story of courage is when 5 doctors told me I should abort a pregnancy, due to what they considered medical complications. The 6th doctor, a woman,  agreed to follow my pregnancy and deliver the baby, at the University Hospital.