Something about trolls fascinates me. A troll in my first children's book, Atom's Monster, is the
catalyst for change, helping the boy hero to move from fear to courage--though not in the most comfortable way! I wrote the story for my 4 year old son Atom, when he was having nightmares, and found that the story was loved by many 3-5 yr olds.

The troll isn't TOO scary; as Atom says, he "doesn't look as though he eats little boys"! In fact, his beard and patched pants might have reminded the real Atom of his beloved papa.

We imagined trolls in the woods a generation later, when Atom's son was 4 years old, and a very different troll emerged. For one thing, the boy's fears and frame of reference were different. 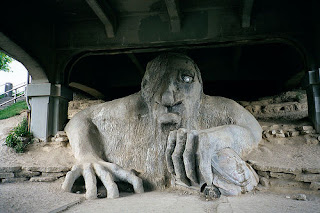 I think the troll my grandson was afraid of was based on the troll under the Freemont Bridge in Seattle--a monster bigger than a house! It eats VW's for heavens sake! And to think there might be trolls such as this in our woods--pretty scary!

He would not go into the woods after that, even with his grandmother. Something had to be done.

The boy's parents suggested he could make friends with the trolls by giving them fish heads, and so a new Troll Story was born.

This troll needed to be scary/not scary. It needed to embody the strangeness and wildness of the woods, but not be overpowering, so  I made it wild and animalistic, but childlike.

The teeth, the fir, the ears, the whiskers, all make it animalistic--almost cat like. Since the family has cats, this brings a familiarity to the troll, making it less frightening.

The big head and eyes, childlike expression, and bare tummy with the belly button showing make it even less threatening. Size is important, too. This troll is actually smaller than the boy.


This story is a work in progress, and I will be showing drafts of it, along with published and unpublished paintings from Atom's Monster and my coloring storybook, Peacock Princess, at the Vashon Tea Shop, during February and March. 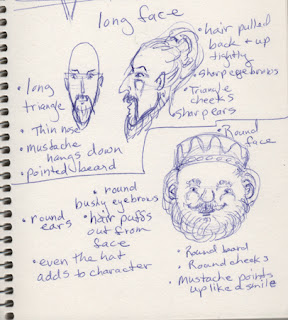 I am learning to use the shapes in a character's face to define a character so that I can make the same character again as well as to give an indication of what kind of person it might be. Traditionally, long skinny triangles and sharp points spell danger and are useful to show a villain, while round shapes indicate friendliness and harmlessness.

By observing these two people closely and analyzing the shapes in their faces, I was able to remember enough of their features to draw them from memory later. The round faced man really did shine with love for everyone. The long faced man did not actually look villainous--just haggard and tired.

With a little more exaggeration, these faces could become a true villain and a truly jovial wise old man, for use in a story.

BTW, the round faced man is a Sufi teacher from Turkey I went to see last night, and the long faced man is his translator.

Posted by suzanna leigh at 9:10 PM No comments:

I'm back! and working hard on character development, life drawing, and watercolor technique.

Good heavens, it's been nearly a month since I last posted!

If you've been following my watercolor techniques series and I have left you hanging, I'm sorry. It's
January, my time of going inward—and perhaps yours as well. And...well, there's something about getting immersed in Christmas activities and turn of the year introspection that erases last year's concerns. Some of them.

I'm all on fire for new projects and new learnings.
And for delving into projects I've put on hold for years.

Oh, I haven't forgotten you, those of you looking for watercolor techniques.  I'm honing my skills in this medium, which means re-visiting some basic techniques.  Please do come along for the ride!

This year—well, at this moment anyway—I've put aside my painting on silk to focus on storytelling in words and images.  I've stories to tell! Some are mine, some are the stories of people dear to me.

I have much to learn about how to illustrate my stories. How to draw characters so that you can see who they are and a bit about how they think. How to paint the magical/real world my characters live in. How to show you the magic I experience on the beach and in the woods.

First on the agenda is my upcoming show at the Vashon Tea Shop. I've decided to show some of my progression illustrating fantasy, starting with my book Atom's Monster and ending with my current project, which I am calling “the Troll Story”. This show opens February 5th at the Vashon Tea Shop, 17610 Vashon Hwy SW, Vashon, WA 98070, reception 6:00pm to 8:30 pm. I hope to see you there.

I will be showing unpublished paintings as well as published illustrations.

Concurrently, I am developing my skills in figure drawing, character development, and watercolor painting. I have found teachers online, in books, and in the studio.

For figure drawing, I am drawing with Will Forester and Mike McGrath in the studio. Also, I am using Mike Mattesi's book Force as well as his online videos.


For character development, books by TomBancroft are my principle teachers.

I am approaching this as my “art school”, expecting that I will have the discipline to “go to class” with my teachers consistently. Do you mind if I occasionally share here lessons from my studies? You will be exposed to some of my failures as well as successes.
Posted by suzanna leigh at 1:39 PM No comments: