A Torn Heart Lets in the Universe 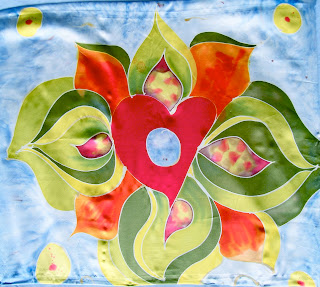 It was on Valentines day that my beloved was diagnosed with lung cancer and told he would have to have part of his lung removed. I finished hemming this, my first ever painting on silk, while he was in surgery, and put it over him when he was in ICU. He told me later that whenever he was in pain, he would put this piece of silk over his chest and it would make him feel better.

I hung this piece at the Vashon Fiber Arts Collective--which we have renamed Vashon Common Threads--for the month of February, and I was telling someone it's story today. She said, "You are lucky to have each other." I did not tell her the surgery did not save Bob's life and he has been gone these 6 1/2 years. Instead I said simply, "Yes....we are."
Posted by suzanna leigh at 12:01 AM