a visit to China 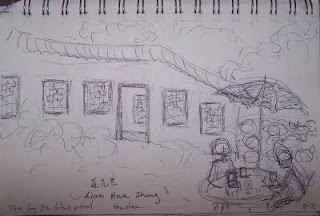 I spent August in China, mostly in the town of Huzhou, with my brother Steve Watkins and his wife Xiao Ning. Except for Steve and one glimpse of another English teacher at the University where Steve teaches, I was the only European I saw in this towm of 300,000.
I felt so priveleged to have Xiao Ning and Steve to interpret the language and culture for me! Steve has been immersed in Chinese culture and language since his college days. His wife Xiao Ning was a teenager during the cultural revolution and spent her working life as a reporter for television in Yunnan Province.
I did about 70-80 sketches and scribbles and a few quick watercolors , took about 1000 pictures, and took lots of notes as well. One of the highlights of the trip was a visit to West Lake in Hangzhou, a beautiful and famous lake treasured by the Chinese. I collected stories from around the lake, and from Steve and Xiao Ning.
I feel that I was given so much on this trip; I want to share some of it with you. Here, I will share some of my sketches and occasional photos along with some of my adventures.  I am working on a series of silk paintings illustrating some of my favorite stories as well. These will be shown at the Tea Shop on Vashon in February, and with that, I will be showing some slides and giving a talk on February 21st, Sunday afternoon. We will be serving Dragon Well tea and a New Year's treat. Bing Im, owner of the Tea Shop, and I would love to have you  come. The cost will be $10, and seating is limited to 20, so look for tickets to go on sale right after Christmas.
Posted by suzanna leigh at 3:52 PM